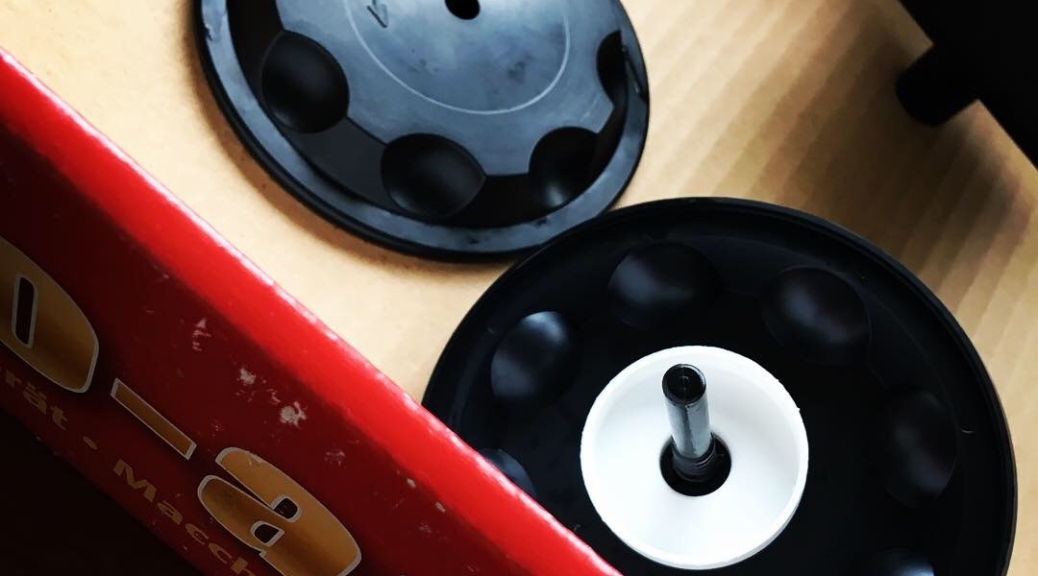 There’s something a little worrying about the Disco-Antistat cleaner, namely that for something quite so obviously simple, it does the job rather too well.
I’d had one bought for me as a present years ago, used it and then put it to one side, a little concerned that there were rumours that it might leave a residue. One which would fur up the needle, and sit in the grooves for years to come. I had postulated at the time that any level of film left in the grooves of the record could only affect sound quality adversely. But I have never to date had any problems, I have never found any residue from the Lps and singles I washed coming off on the stylus, nor any degradation of the records treated, no reduction in sound quality. However I still don’t quite trust the Cleaner, trust is a hard thing to give when it’s your pride and joy record collection that could be destroyed by some cheap record cleaner system and a few positive online reviews. 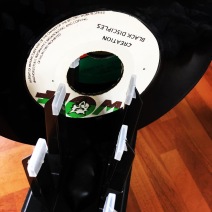 The ‘System’, if a few bits of plastic can be called a ‘System’ consists of a big bottle of what is surely mainly Isopropyl-Alcohol and something mysterious that cuts down static issues. Then also a bath for the record with brushes welded inside, brushes that when you suspend the record via the handy label protecting spindle adaptor and rotate the record manually, clean said record. Hands get wet with the solution while rotating, it sloshes a bit, you rotate both anti & clock wise, you finish, somewhat awkwardly unscrew label protecting spindle ‘thingy’ and place newly cleaned record to drip and evaporate dry in the handy, ‘this was once tucked in the bottom of the bath section drying rack’, as pictured right.

It feels a little jim crack, but it was time to give it a proper test.

So when I was recently given a record that had once belonged to my mother, ‘Mystery Train’ on the HMV label, the re-issued Sun Recording, sold with Elvis’s contract to RCA, and it was in it’s terrible 60 year old uncleaned state, I took this test worthy opportunity to see just what this relatively cheap record cleaning system could really do (again).
Frankly I was floored by it’s performance. With a few manual turns (in both directions) of the record in the cleaning bath, through the brushes and then a short drying time, the improvement was gobsmacking. A lead-in groove which had previously sounded like a commando attack with accompanying light arms fire now only hinted at it’s previous incendiary and crackly state and the record played clean, with a full sonic range and looked shiny and as if it had only just been pressed. It improved the record from unplayable to playing and damn fine in about 10 minutes.

Since then I have washed a few further records including some valuable Jamaican singles which were in an unplayable state. All have been massively improved. Rather than leaving them to fester on the shelves, they’re getting played and that’s what it’s all about. 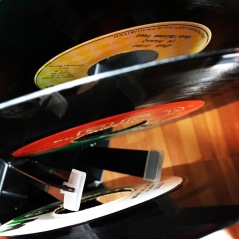 The kit I have as I understand it has been superceeded by a MkII version, and the one I have does suffer from a cheap construction and a rudimentary and manually operated design. The fluid is impossible to pour back into the bottle supplied via the funnel and grime filter without spilling a sizeable ammount every time you use the kit, and it goes everywhere. This is very annoying and poor design is poor design, whether it is cheaply produced or not. The kit retails for under £50, new bottles of fluid are about £10 and to look at the boxed contents of what you get for your buck you would be forgiven for being disappointed; and yet if you considered the results only, you would consider the money it costs, to be VERY well spent.

I’m still reserving some judgement, just in case there proves to be an issue with any residue long term, but currently I’d give it 9 out of 10 for results, considering it’s simple operation and outlay.

This ‘article was written because though rumours abound of residue issues, with some people even just using the bare bones of the machine with distilled water and not the ‘Majic Formula’ to avoid those rumoured problems, no online review existed that directed talked about this head on and I could myself find no information to either confirm or deny the residue rumours with this kit.

I hope this has been helpful to those of you with old grimy Vinyl that needs a gentle scrub.